Ronan of Space
​Behind the Scenes

Ronan of Space very nearly didn't happen as I was prepared to end everything with Rhys' return to Firekli. However, it was my husband who stopped me and, while I was writing the epilogue of Rhys of Quadrant Six, suggested that something else happen. The story wasn't yet finished. I begrudgingly obliged and brainstormed some ideas, knowing that I had a monumental task ahead of me.

How was I to create something more epic than going to the moon to save Earth from a rogue AI? How was I to come up with something even more fantastic?

My rule of thumb is this - if you're stuck, start writing a list of possible plot ideas or outcomes. Write as many as you can, steadily making them more outrageous and ridiculous. By the time you're done, you will have your story. So, that's what I did.

After having a general idea of what direction I wanted to go, I turned my focus onto Ronan himself. Honestly, who would want to be Rhys' son? Rhys accomplished so much in his life, from relearning what it means to be human to saving Earth to acting as an international ambassador for multiple nations. Looking back at all Rhys had accomplished and imagining him as a father, I began dreading who Ronan would become. Expectations were high - if Rhys was so talented and well-liked, Ronan would be too, right?

As I dove into the mind of a teenage boy, I began resenting Rhys (something I never thought would happen). From Ronan's perspective, it seems his father had no time for him or his family. Everyone turns to Rhys for answers; everyone wants Rhys. Examining this train of thought, I felt Ronan's bitterness start to form and that laid the foundation for his personality.

Ronan is not supposed to be liked in the first quarter of the book. He's been raised in ignorance and privilege. He is hot-tempered and a know-it-all, choosing to get into trouble and create scenes to  keep himself entertained. It isn't until he, Wes, and Mika are separated from their families that he begins to develop as a grounded character and grows into someone the reader can trust.

In fact, the longer Ronan is isolated from his family (and to a certain extent, his friends), the more mature he becomes. He transforms into a young man with a strong sense of right and wrong and a unique perspective of the world. His blossoming friendship with Cassius the Alpha nurtures this transformation, eventually pushing Ronan to feel that he can stand by his father's side as an equal.

When You Know, You know 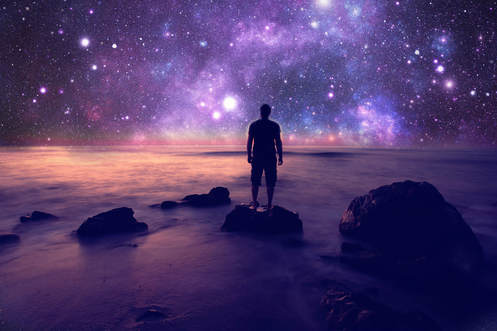 I knew as I began writing Ronan of Space that Ronan was, in fact, going to end up in space. The only question was how did I get him there? I wanted to toy with the readers and make them think that because chunks of the book occur in space, the book was named thus. If I got you - Ha! The misdirection was absolutely intentional!

I needed Ronan to leave Earth, to never come back. I knew that was going to happen before chapter one was even written. Rhys, his father, had made Earth home. Now, it was time for Ronan to do the same in space. But, as I said previously, how was I to get him into space? How was I to separate him from his family forever? The concept was a daunting one.

​After the creation of the Alphas, Cassius - as he would later be called - came to me and said that he would take on the responsibility of leading Ronan to space. I agreed to give him Ronan and from there the relationship between the two grew and evolved.

​“I suppose I could give him a name.” Rhys thought for a moment. After examining the glowing gauges in front of him, he said, “Cassius.”
For some unknown reason, Severiano chuckled. “Cassius. Fine, we’ll call him Cassius. A fitting name for such a traitor.”
“Well, we’re not entirely sure of his story, but it does seem appropriate, right?” offered Rhys. “Cassius.” He nodded and under his breath said, “I can be funny when I want.”
“That’s not what I heard from Kallen and Hodge.”

​Did you get the reference? Studied literature fans know that Cassius the Alpha was named after Gaius Cassius Longinus, a Roman senator who led the conspiracy to kill Julius Caesar. He is considered one of history's most notorious traitors. He is also a supporting character in William Shakespeare's play Julius Caesar. Subsequently, in Dante's Inferno, Cassius is one of three people deemed most sinful and banished to the center of hell to anguish for all eternity.

The Falkrow Narratives were written to explore various coming-of-age stories from the point of view of young adults/new adults. So it's no surprise that Rhys, Kallen, and Hodge's unlikely relationship comes into question in Ronan of Space.

Rhys of Quadrant Six provided readers a semi-satisfying solution to amend the broken relationships Rhys encountered upon his return from abroad. Hodge simply states that he'll step aside and allow Rhys to carry on with Kallen as they had been in the beginning. This, however, doesn't last long as readers soon find out in Ronan of Space.

Rhys is ever-gone, attending to diplomatic matters or traveling, leaving Hodge and Kallen to raise Ronan together. It isn't until the last quarter of the book that Ronan questions their odd relationship and even his paternity!

I was worried giving my characters an open relationship because open relationships are typically viewed negatively by society and denote loose morals. But, Rhys, Kallen, and Hodge assured me that this was what they wanted. There were no other answers. Compromises could be made, love could be shared, tasks could be split - they would make it work. I agreed to let them proceed and, as far as I know, they are still living happily in Firekli.