Rhys of Quadrant Six
​Behind the Scenes

Of all of the books I've ever written, Rhys of Quadrant Six is by far my favorite. The book's primary themes of courage and persistence are echoed throughout the story and displayed by numerous characters in a variety of situations. These motifs resonate with everyone - including myself - and tie me ever closer to the story. It is not just Rhys who shows astounding resilience even in the face of danger, but his close friends and shipmates who echo their Overseer's resolve and persist despite their owns fears.

Rhys of Quadrant Six takes readers not just to Earth but to the moon as the crew of Themis attempts to stop an ancient, rogue AI from using the human species as one would chess pieces. It tests Rhys' resolve and cleverness, his adaptability and intellect while drawing on deeply-rooted, human emotions such as  fear, unconditional love, gut-wrenching betrayal, nostalgia, and loneliness.

As the author, I felt deeply connected with Rhys and experienced his frame of mind countless times. Being young and untested, Rhys is forced to overcome obstacles that even veteran strategists would find unsavory. He works as an ambassador and protector, Overseer and guardian. The darkness and hopelessness that he felt weighed heavily on me as I wrote. He dictated to me what was happening. I couldn't interfere no matter how unsettled I felt.

All of that being said, this page is not going to be a light-hearted exploration as the themes, research materials, and scenarios within Rhys of Quadrant Six​ are grim and reminiscent of reality. 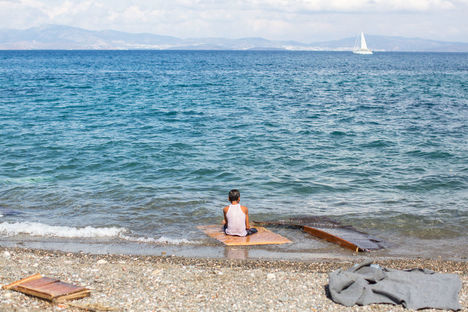 While working on Rhys of Quadrant Six, the European migration crisis of 2015 began. Asylum seekers, economic migrants, and refugees crossed into the European Union (EU) to escape war, destitution, terrorism, and religious persecution. With the majority of the migrants coming from Muslim-majority countries, their entry into the EU was a contentious one, prompting a sharp rise in nationalism. By the end of 2016, it had become a "refugee crisis" fueled by persecution, war, and violence in which the majority of refugees fleeing were from war-torn Syria and Afghanistan.

Setting aside the issue of known terrorist organizations using the crisis to infiltrate Western Europe, I focused on the cultural aspects of such a transition. In Rhys of Quadrant Six, Pantarak migrants from Paducah, a sea-side nation ruled by a religious oligarch - the High Priest - flee from their homes after rebelling against their government. When Brechin's Pantarak-backed, extremist Council attacks the rebellious city to remind it of its place, its people flee, sailing to the nearest safe haven - New Arbroath. Their arrival is not a welcomed one as they have been enemies of the non-Pantarak population there for decades.

The migrants make a temporary slum area along the shoreline as they are not allowed into town to trade, shop, or find medical services. Tattered shelters of tarps, cloth, and water-logged wood are constructed; raw sewage dirties the shore; people wander aimlessly; the wounded and sick are sectioned off among the refugees.

In the subsequent chapters, Rhys and his crew work diligently to organize the slums. With a little order and leadership, they assign migrants jobs, clean the area up, compromise with New Arbroath regarding trade, and provide medical assistance.

This simplified reflection of reality's sobering situations helps provide some insight into what exactly it would take to ease the "growing pains" of the refugee crisis. Unfortunately, no real solution is reached between the Pantaraks and citizens of New Arbroath as their negotiations are corrupted by Brechin's encroaching military forces.

European Migrant Crisis - Wikipedia
What is the Current State of the Migration Crisis in Europe? - The Guardian
Europe remains as divided as ever over ‘almost impossible to solve’ migration crisis - CNBC
​Europe's Migration Crisis: Could It Finish the EU? - BBC News

Real Surgery in a Fictitious World

It might come as a surprise to you, dear readers, but I am not a medical professional. So when I was told that one of my supporting characters was about to undergo traumatic and possible fatal injuries, I turned to a true medical professional - Wendy Lawson, the Director of Allied Health at Oklahoma Heart Hospital South Campus in Edmund, Oklahoma.

During our hour-long conversation, Wendy taught me (on a superficial and layman level) how to (1) repair and fortify a deep abdomen wound and (2) how to surgically and professionally care for a severed arm. Without Wendy's help, poor Axel might not have survived!

Do You Know the Answers?

Don't know the answers to any of these? Neither did I. Research!

Knowing the risks involved with launching into space, Rhys is rational and realistic.  He deems Hodge as Kallen's caretaker and provider should he not return. Of course Rhys returns - nearly two years later.

His unfortunate reentry into Earth's atmosphere sets him on a path of continuous traveling and adventures. Returning to Firekli as a much more worldly individual, Rhys finds that Hodge and Kallen have partnered up romantically.

Going into the epilogue, I knew that just as time passed for Rhys, time also passed for Kallen and Hodge. While Rhys was away, a lot happened. Kallen went through her entire pregnancy and gave birth; she and Hodge co-bought a house with Emmi and Forge; they began raising Ronan, Rhys' son; Hodge started his own courier business while Kallen began doing freelance repairs.

Every book I have ever written has an accompanying soundtrack. Of course, I personally don't compose said compilations (although I've tried!). Usually, the "soundtracks" for my books are comprised of original sound tracks from other movies, shows, and series as well as abstract artists.
Each song is tied intimately to a part or series of events in the story. Music can also be representative of the book as a whole or even act as an "opening" of sorts. All openings for my books are usually set as the first song in a playlist.

With that being said, below is the soundtrack for Rhys of Quadrant Six. ​