How do you begin a book with such a unique blend of genres? Into what place do you drop your readers? I struggled with the beginning of Breach Effect because I couldn't decide when/where to start. In one iteration, the book began immediately after Ewen arrives in the new world and Jaxon discovers him in Raub Memorial Park. In another version, I began a year after Ewen's departure from his world. Eventually, I decided to split the difference. I wanted to lay enough groundwork that I didn't have to explain to the reader in detail how Ewen learned to communicate using Sprites or do introductions.

Because I had already been working with Ewen throughout The Dragon's Son, I knew who he was. But the members of Sundown were strangers to me. Prior to beginning the plot-writing process, I had to flesh out each of the characters, taking particular care to understand their motivations and personal histories. Bringing together the members of Sundown was a chore in itself, but I thoroughly enjoyed getting to know Jaxon, Silas, Faye, Sunny, and Micah.

Unlike Cardinal Zero, I wanted to focus less on the physics of the science fiction world and more on the human relationships. I could easily have included Jaxon and Micah's aerial dogfighting but decided to keep readers engaged elsewhere.

Volcanoes & the Geography of Java 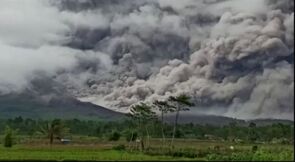 With the crew of Summerwine heading to Java and Ewen's showdown with Mt. Semeru imminent, I knew I needed to brush up on the science behind volcanoes--fast. I began watching documentaries, asking questions on Reddit, and reading journal articles about the physics behind volcanic eruptions. Here are some of the questions I pursued:

On top of researching everything from tectonic plates to gas ratios, I also had to take into consideration the island of Java's geography (as it was in the distant future, not as it is currently). I reviewed the historical records of Mt. Semeru's eruptions over the past several hundred years and then created an eruption similar in scale and magnitude.

I also had to determine if Mt. Semeru's eruption could reach Juanda International Airport (Java's international airport located near Surabaya). Normal eruptions would come close, but not reach it. However, an abnormal eruption--such as the one Ewen was forced to face--most certainly could. So, how long would it take for a pyroclastic flow to reach the airport some 50 miles away? What kind of damage would it cause?

Much thought was put into Ewen's first trial as Aurora incarnate.

Did You Catch It?

If you've read Cardinal Zero, you're likely to have caught some of the references dropped throughout the book. These include:

The Falkrow Narratives are referenced far more indirectly with the existence of  Caelestis, the famed space colony from which protagonist Rhys Falkrow and his sister Alina escape.

In a nod to The Falkrow Narratives, Jaxon says the following in a message to Ewen:

"... I know you probably don’t understand the significance of that but… know that your gift not only saved millions of people but is now being used to further assure humanity doesn’t go extinct. I mean, who knows? Maybe humans will return to Earth thousands of years from now, voyagers from Prima Signa or Caelestis returning to the cradle of humanity.” He sighed. “That would be a story.”

The Music of ​Breach Effect

Every book I write is accompanied by its own soundtrack. Sometimes I include pieces of the soundtrack in the Interactive Media section. Here are some of Breach Effect's highlights: